Buddy and I headed to a larger area river for a float. We arrived on stream around 10am.

Without a cloud in the sky we cast a long shadow all day. We tried streamers, dries, and a few nymph patterns. We spotted very few risers today despite the banks being peppered with midges and little black stone flies. The San Juan worm was the best performer.

Stream temps ranged from 38 to 42. Air temps reached the mid 40s and winds were light.

It’s a little hard for me to get used to floating. You have much less time to work spots versus when doing a walk and wade.

Nice to get out again and soak up some sun!

I fished the morning with a friend on a stream bubbling with springs. I always expect this stream to fish well in winter but it’s never treated me well. This morning was no aberration.

We tried streamers and nymphs with both fooling no one. It was nice to catch up with a friend but we both got skunked. He flew in late last night and needed a nap. We parted ways around noon. By 1pm I was lunched up and ready to get back at ‘er. 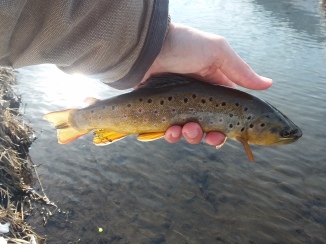 The streamer bite I had badly anticipated never materialized. Around a dozen came to hand over a few hours expressing interest equally between an orange scud, San Juan worm, and red brassie. Temps probably reached the low 40’s and clear skies left the fish skittish. Both streams today showed no signs of runoff. Tomorrow looks good too!

I looked forward to this day for the last few weeks. No obligations other than to slay trout!

The setting was fantastic. I arrived on stream around 830am and immediately put some distance between the car and I. Temps started below freezing before edging up to the mid 30s by the time I stumbled to the car at 4pm. Winds were light but picked up enough to make casting the glass rod tricky for about an hour. The sun shined all day making a stealthy approach, long casts, and light tippet imperative. The snow was tough to trudge through and shelf ice was treacherous. But fish were eating.

This decent brown trout took a sz 18 orange scud fished on the bottom. I stubbornly stood by the scud for far too long! By around 10 I could no longer ignore the hordes of midges crawling on the ice shelves. 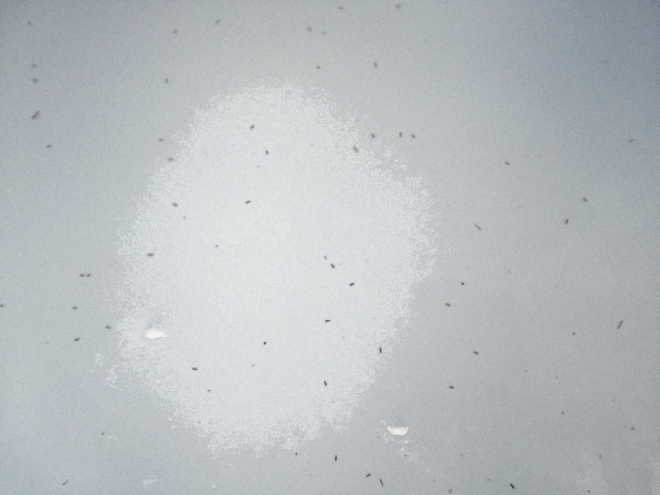 I tied on a sz 18 Griffiths gnat and never looked back.

This guy was the fish of the day! I missed quite a few nice fish due to poor hooksets. Around lunchtime things slowed down so I smashed a sandwich and looked out over my domain. 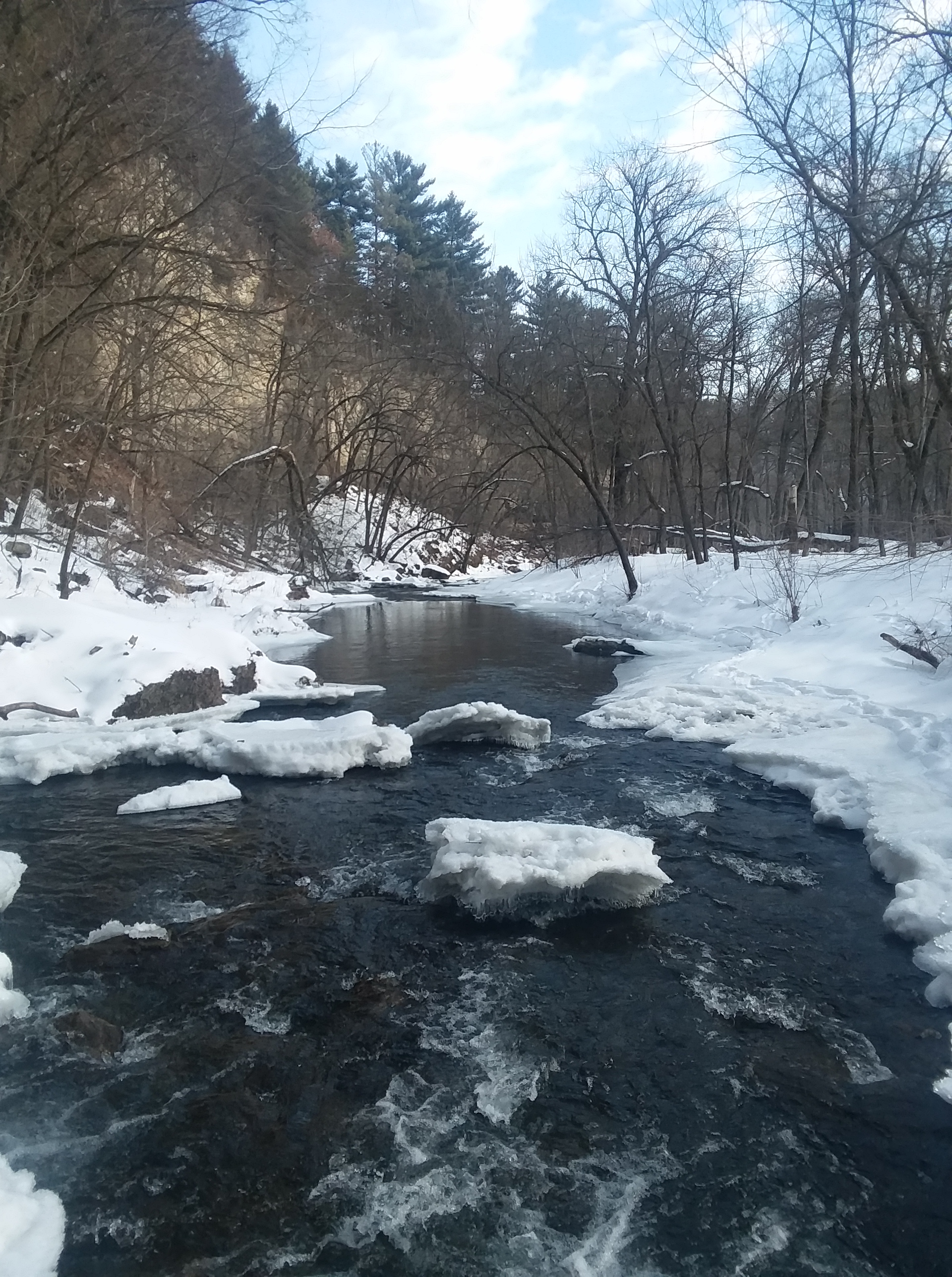 After lunch I continued upstream noticing all kinds of beautiful views. 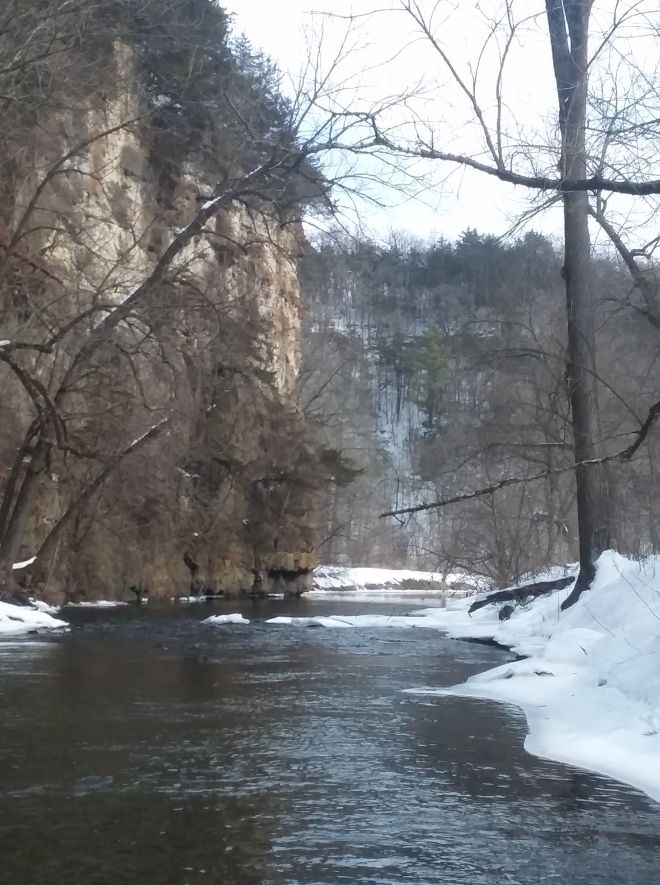 Before too long I turned tail and headed for the car. But as I got closer to the vehicle I ran into more risers.

Fish were really spooky under clear skies today but a long leader, a gentle approach and the right fly were key. Around 2 dzn came to hand with a fairly even split. No brookies:( Stay tuned though, next weekend I’ll be back at it.

I hoped for fast and furious fishing over the weekend. Temperatures were right. Typically warmer temps with dry snow dont contribute to runoff. The snowpack can take plenty of moisture before trickling into the stream. My only concern was clear water and sunny skies. Both days fish rose to midges, but frequently scattered before I could get close. 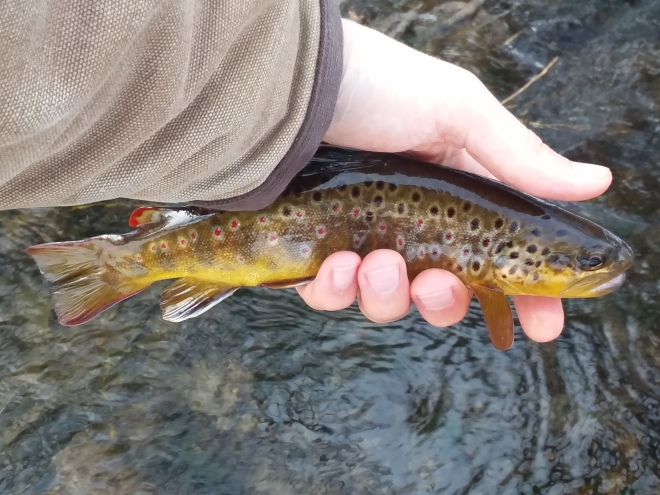 On Saturday they rose to the midge readily. I had to make heroic casts and brought around 1.5 dozen of these little guys to hand. Most took a size 20 Griffiths Gnat. I tried a streamer on and off with only two takers.

On Sunday a buddy and I went hard after em. Fish rose to midges but only barely nipped at streamers. After a while we gave up on em in favor of the G-gnat.

This guy ate the Gnat after my buddy fished at him for 15 minutes or so. It felt good to show him up! After a long day with very few fish to hand we decided to hike a bit.

We hiked some beautiful bluffs. I hoped to find lots of deer sign but found very few. Probably lots of hunters come November round these parts! Cant wait to get out again!!!

With temps in the 30’s, cloudy skies, and in the midst of a week long winter warmup I knew conditions were prime for good fishing. I had very limited time so I chose to fish close to home. Around two dozen fish came to hand both days.

Brookies were not as aggressive as browns but a few came to hand over the last couple days. I started out with the streamer yesterday but only landed two before changing to a size 14 orange scud. That was the ticket!

As the afternoon pressed on and action slowed I switched to a size 18 orange midge. A red brassie of the same size worked well too.

Around 11am both days a nice midge hatch popped off! The bugs were black and around size 18. A few willing fish took the Griffiths Gnat but only off a light tippet and long leader! My custom fiberglass 7′ 6″ Blue Halo 4 weight fished like a dream.

Most of the fish landed were around this size. Yesterday I lost two 15-17 inch fish before I could land em. Today I didn’t spot any really nice ones.

After fishing for around two hours each day I was happy to call it a day. Next weekend I should have more time and the 10 day forecast suggests conditions will stay good! Midges and scuds should be your go-to patterns through the rest of the month and next. Little black stone flies will make their appearance soon as well. Streamers are also worth trying. Fish em low and slow.

My buddy Jesse made a new years resolution of sorts. He has resolved to fish more new streams. We both tend to get stuck on our old reliable spots. Winter is a great time to explore new stretches of water for a couple reasons. First, it is easier to navigate the banks void of streamside vegetation. Second, rivers are usually clear allowing the angler to spot fish and survey the stream for structure. Third, moving feels good! Walking more keeps ya warm and driving from spot to spot offers an opportunity to warm your core. On Sunday Jesse and I checked out a few new spots. The first stream required a little hike in. We moved quick and spooked lots of fish. We caught none at this spot but spooked many, including one around 20″. I also engaged in a brief battle with one around 17″. He snapped my San Juan worm off on a rocky undercut bank. We both agreed to return to fish it more diligently. We checked another spot that looked “meh”, then on to another spot.

This tiny stream was a blast. Jesse is a spin fisherman and struggled a little on such small water, but I had fair luck.

These easily spooked fish readily ate the San Juan worm. I landed around a half dozen here.

Most fish ate the fly as I dapped it in deeper pools and chutes. We hiked up to the springs before calling it a day. I’m excited to see where our next adventure will take us! 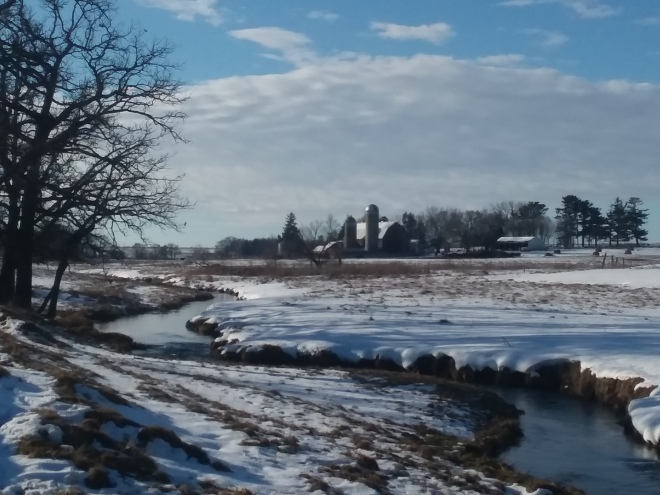 I got out today for a few hours to chase cold trout. This isn’t where I fished but I like the picture! Instead I stopped at a new stream, and two new sections of streams I’ve fished before. I started out on a new stream that gets no attention. Skies were sunny and the sir was s chilling 12 degrees when I suited up. Winds were moderate. From the access point I noticed a few risers! I tied on a size 20 Griffiths Gnat.

This little guy was all I managed on the dry. Fish were easily spooked under such sunny skies. I spotted a few decent fish before switching to nymphs. I fished a San Juan worm and an orange scud for the majority of the outing. 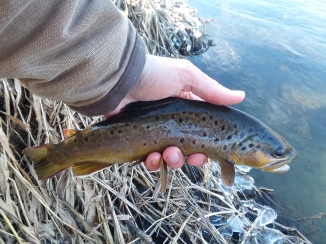 Besides a few sluggish riders most trout were glued to the bottom. 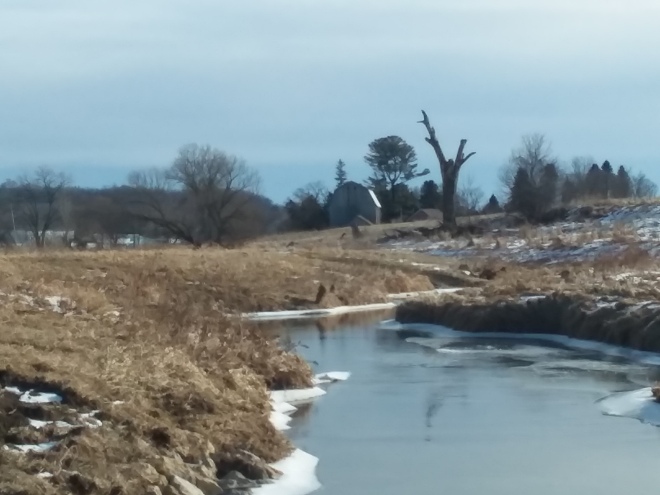 After a few hours of making long casts in the chilling wind, and in diminishing sunshine, I decided to call it a day…until I passed another stream on my way home! I’ve fished almost all of the public water on this last stream so I hit the one area I’ve thus far avoided. In this spot i chose a streamer, logic being that this area is full of springs which likely keep the water warmer.

This guy smashed it! I coaxed another 4 out of undercuts. I missed one really nice one that came out and nipped the fly as I picked it up to recast. It was nice to get out but after 4 hours in the wind and cold I’m happy to be curled up on the couch under a blanket. I did get out yesterday afternoon and got a few on the orange scud. 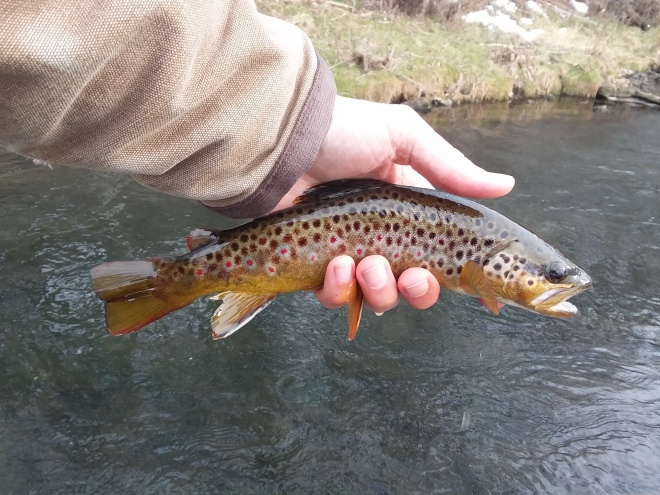 Fish were biting aggressively until this week. As we remain in a colder weather pattern foshing will likely stay slow. Streamer will probably be least effective although fishing them slow and deep may provide a tug. Orange scuds, pink squirrels, San Juan worms, and zebra midges should continue to fish well provided they are fished deep enough (on the bottom). Midge emergers and dry flies should continue to fish well when fish are seen rising. On colder days (sub 30) fish will be most active from around 10am-2pm. Sun can help keep them fishies warm but make sneaking up and casting to them w/o spooking ’em a challenge. I fished with a 9 ft leader and 2.5 feet of tippet down to 5x. For dry flies 6x would have been better. The fiberglass rod was a challenge to cast during the breezier parts if the day.